Growing up in Balkhan was easy during times of war but hard in times of peace. At least that’s what my father said. Really I never paid much attention growing up if I wasn’t out hunting with him I mostly ran about the city. We, I mean my father, mother, Anna, and myself made a little living selling meat and pelts from animals we hunted.

At least until the winter of 2581 it was especially cold and harsh, hunting became so scarce my father and mother decided to use their natural ability for tracking to help the city and became scouts. It got us through and actually proved more profitable than hunting at times. Thanks to their natural talent they arose through the other scouts to become the go to team for stealth reconnaissance. Thus we prospered for years until one unfortunate night. My father told me he was at fault and didn’t see the signs there was a trap but truth be told the Africans had planned the ambush for them to the smallest point in what directions to lead them. My mother died quickly as she bled out a shot to the throat. My father wasn’t as lucky he sat there and watched the life leave my mothers eyes and listening to the only two words she could muster up “love family” after that they tortured him for weeks cutting off his right arm at one point. A group of soldiers lead by a Hellvetic sniper found him barely alive and brought him back to Balkhan.

He died two years later from leukemia. In those years he taught me everything he could pass on so that I could take care of my little sister Anna. I’ve been a scout ever sense.

Now me losing my tongue not as much of a gut-wrenching story. Basically while scouting ahead for the fire team I was in a very green recruit got gun ho and step on an alarm trap hidden in the shadow of an explosive trap. Though before I could act he stepped on it and set it off. I told the fire team I would lead them away and the group could hold position while I lost them. Unfortunately I was to slow and they caught me, thus I spent the next three days tortured and hounded with questions. When it came down to a point they said if I didn’t answer correctly I would regret it I told them in shitty African their mothers fuck goat’s. Then “slice” it’s not all that bad I can talk somewhat and my interpretive dance has been known to move people to tears… back to my story though.

One night my guard got lazy and fell asleep I managed to slip out of my shackles by breaking them. Three days of constant movement and ware helped. Slipped back to a search party and passed out. Woke up a week later to find out my sister Balbina was in one of the two groups sent out for me. It was reported that they came across some apocalyptics and a fight ensued. Her body was never found so I still believe she lives. Now here I am with a group of legates and clanners. Hoping I might find and save her. 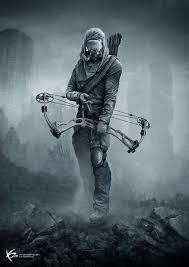