Money
There are two common currencies in use: the Chronicler Draft (CD), and the NeoLiybian Dinar (DI). Drafts are printed on tough plastic, impossible to counterfeit, and Dinar are milled gold, silver, or copper alloy coins.
A gold piece is worth one CD or Dinar; a copper piece is worth one dec or kuna. 100 decs make a CD, 100 kuna make a Dinar.
50 coins weigh a pound, regardless of type. CDs and decs have no weight. See bottom of page.
An ounce of gold is worth 25 CD, an ounce of Silver 8 CD.
Quart: 2 pints   Gallon: 4 quarts, 8 pints 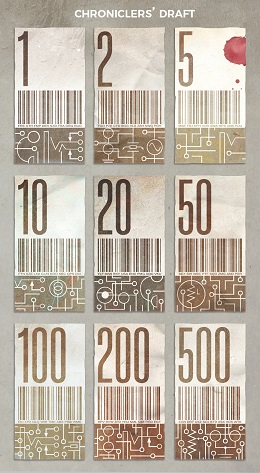 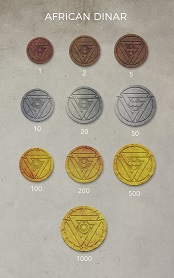 General Equipment, Player's Handbook, p148-159
This list is valid, using the money conversion noted above. The following items on the list are NOT available: Acid, Alchemist's Fire, Arcane Focus, Ball Bearings, Component Pouch, Druidic Focus, Healer's Kit, Holy Symbol, Holy Water, Poison, Potion of Healing, Rations, Spell book.
Equipment Packs on p.151  the Priest's pack is not available. Note that the above list of what is not available still applies.
Mounts and Vehicles (p.155) are unchanged; a mule with pack saddle can carry 225 pounds of gear.
Trade Goods (p.157) are unchanged, except that Platinum is not available.
Food, Drink, & Lodging (p.158) and Services (p.159) are unchanged.

In less populated areas check with the GM to see what goods and services are available. Pre-game purchases are not affected by this.

Field Rations
Vinegar: 5 dec per gallon (A pint of vinegar can make 4 gallons of water safe)
Dried Rations: Consisting of hardtack, pemmican, hard chocolate, and dried fruit, dried rations are intended to be eaten without preparation, even on the move. One man-day weighs one pound, and costs 50 dec. In hot weather the use of dried rations will necessitate additional water.
Travel Rations: Oatmeal, rye flour, salted meat or fish, salted lard, dehydrated vegetables; travel rations are heavier, cheaper, and require a method of cooking and a mess kit to consume. One man-day weighs two pounds, and costs 25 dec.
Canned rations: Canned food, usually soups and stews, coupled with canned bread. Heavier, requires a method of cooking and a mess kit to consume, but cuts the daily water requirement in half. One man-day weighs four pounds, and costs 50 dec.
Comfort Food: Sweets, cookies, snacks, etc. When eaten during a Long Rest will remove d3 Stress. Has no real food value.  Cannot be used two days in a row. 1 CD, no weight.
Rotgut: A pint of wood alcohol cut with pitch, used for fueling field stoves, and as a last resort for alcoholics in the final stages of their disease. 20 dec.
Whale oil: Used for cooking. If applied to the feet every day will significantly delay trench foot in wet climes (one pint will treat the entire group for one day, but the smell is a problem for stealth). 15 dec a pint.
Coal: 10 dec a pound.
Gasoline: 100 CD per gallon in Europe, 5 in Africa.

Tool kits, p.154
Poisoners' Tools are not available. Thieves' Tools count as a magazine or two grenades on a LBG (see below).
Alchemy Supplies are replaced by the Mobile Chem Kit (half price, same weight); PCs can also rent a Chem Lab at 10 CD per day.
Armor Repair Kit: Used to repair armor. 10 lbs, 15 CD. Repair supplies cost 1 CD per unit; 1 repair unit will restore two Structure.
Cook's Utensils: (p.154) A PC with proficiency in this kit and a portable stove can roll once a day to improve the quality of the group's meals. Success (modified by food available, conditions, etc) can reduce Stress or even add temporary hit points.
Decipher Kit: Restricted to a to specific language, but does not require a proficiency. This allows a subject to attempt to translate Time Before writing, so long as it is based on a language they speak. 45 CD.
Mechanics' Tools are used to repair, maintain, and modify mechanical devices. 50 pounds, 75 CD.
Rent a Workshop: Usually 1d6+1 CD per day, double if you want it exclusively for your project.
Wire cutters: 3 CD. No weight, counts as a magazine or grenade on a LBG (see below). Not a proficiency.

Medical Gear
Antibiotics: A creme which removes the effect of Toxicity from a wound; requires an Action to apply. 2 CD. No weight.
Antitoxin, Auto-injector: Taken as an action ends the poisoned condition and any ongoing poison damage. 10 CD. No weight.
Autopsy kit: Needed to conduct an autopsy. 10 lbs, 40 CD. Roll Medicine skill.
Bone Shot: A drug that cuts time wearing a case in half. 10 CD
Cast: A harness of canvas, leather, and metal that holds a broken bone stable while it heals. Reusable. Once a broken bone has been set and the damage healed, a cast will be needed for a period of time (14 days arm or rib, 20 days leg). While worn an arm cast inflicts -3 when using the arm; no Dash for ribs or leg. Arm 3 lbs, 25 CD; ribs 6 lbs, 35 CD; leg 4 libs, 30 CD.
Dental Kit: Use to treat teeth. A much-in-demand skill. Required IQ 12+. Small chest, 40 lbs, 150 CD
Digestive Remedy: No weight, 5 CD.
Fibulator: A disposable auto-injector pre-loaded with a drug that raises Unstable rating by 2. No weight, 25 CD
First Aid Kit: Holds one unit of medical supplies; on a DC 12 Medicine roll, the user can heal 1d4 hit points in an Action. Each Heal consumes one unit of Medical Supplies. 1 CD 50 dec. No weight. If more than one is carried, counts as a magazine or grenade on a LBG.
Flu Remedy: No weight, 5 CD.
Medical Kit: Holds twenty units of medical supplies, plus tools. Must be proficient in Medicine, heals 1d6 (modified by Feats and Class abilities) per Action. Each Heal consumes one unit of Medical Supplies. 10 CD. 10 pounds. Takes up a pistol slot on an LBG.
Medical supplies: 50 Dec per unit, used to restock First Aid and Medical Kits. No weight.
Nanpak: A disposable auto-injector pre-loaded with nano-mites in a nutrient solution. Used as an action on a living creature restores 6d4 hit points. No weight, 25 CD.
Nanpack Beta: As the Nanpack, but heals 6d8 hit points, 50 CD, No weight.
Surgeon Kit: A small chest holding the tools and equipment needeed to deal with the complications of Brutal wounds. Requires IQ 12+. 40 lbs, CD 250
Stabilizer: A disposable auto-injector pre-loaded with a drug that will eliminate the effects of 1d6 Stun. . No weight, 5 CD

Scrap and Loot Value
Scrap is any reclaimable goods; it does not have to be from Before, and frequently isn't. Prices are for an alcove; if dealing with Scrappers, reduce sale vale and increase purchase cost by 25%.
Type I: Metals, plastics, etc.  50 dec per pound
Type II: Formed metal or plastic parts, tubing, wire. 1 CD per pound.
Type III: Electronic components. 40 CD per pound.
Type IV: Complete or near-complete non-working devices. 100 CD per pound.
Pre-Fall tools: 5 CD each.
Harvested items: Gendo hide, good condition, 25 CD per age rank. Gendo fangs, 5 CD.

make a DC 15 Dexterity saving throw, taking 2d6 piercing damage on a failed save, or half as much in damage if successful. 0.5 pound, 40 CD. Ballistic armor applies. Due to length, takes up two grenade slots; however, two stick grenades can be carried tucked into belts, boot tops, etc., without taking up any slots.
Smoke Grenade: A smoke grenade can be thrown at a point up to 80 feet away. At the beginning of your next turn the smoke grenade lands releases a cloud smoke that creates a heavily obscured area in a 20-foot radius around the target point. A moderate wind (at least 10 miles per hour) disperses the smoke in 4 rounds or a strong wind (20 or more miles per hour) disperses it in 1 round. Otherwise, the smoke disperses after 10 rounds. One pound, 25 CD. For 5 CD extra, the smoke can be colored green, yellow, red, or purple.
Dynamite: One stick is one pound, and not much more effective than a flashbang if thrown; dynamite is intended for demolition work. 15 CD. C-4 is roughly four times more effective than dynamite, but is hard to find.

® = If prone on same level as grenade, take half damage (a grenade on a flat surface explodes up and out).