Other Rules and Rule Modifications

Addiction
Whenever a character consumes an addictive substance, they must make a Constitution saving throw against a DC determined by the substance in question. On a failed saving throw, the character gains a level of addiction. Addiction is measured in three levels. A character can have multiple addictions, each with its own addiction level. If addicted, a PC goes into withdrawal after 24 hours without ingesting the substance. 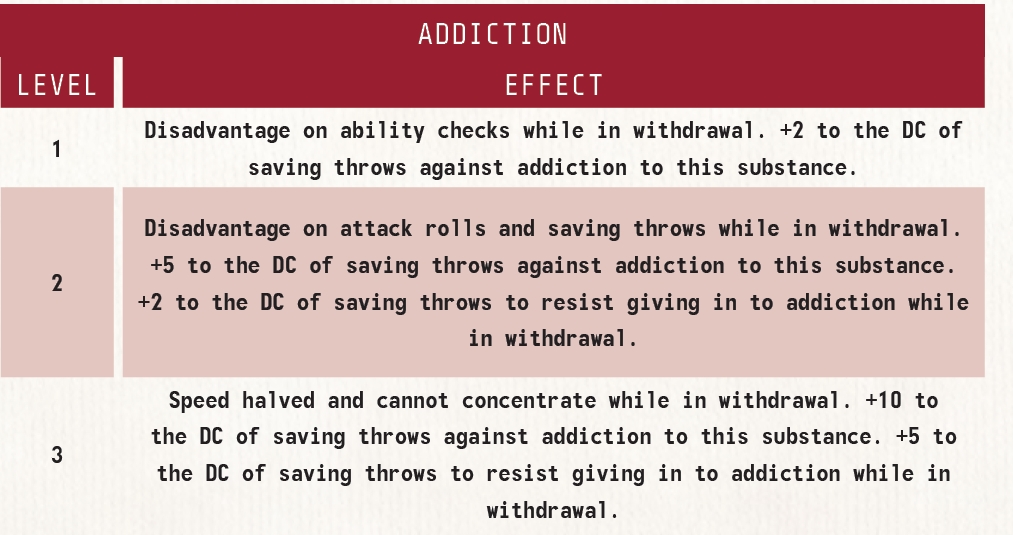 Extra Weapons
Carrying more than one long gun, or two handguns, or one large melee arm (a bow or crossbow counts as a long gun) means that changing a weapon requires a full Action. Some specific weapons may be exempt. Thus a PC can (wearing LBG), carry one long gun, two handguns, and a long melee weapon without penalty. One dagger/knife does not count. If a gas mask is not carried, a third handgun may be added.

Fate Coins
Fate Coins are awarded for excellent roleplay/ideas. They are assigned to a player, not a PC, and are good until used. Fate Coins carry over between campaigns; they can be played as:
1)  a 19 on a d20 roll; cannot generate a crit, but all other pluses apply.
2) Can be used to help stabilize a PC.
3) To duplicate the effect of a single-color Fate Charm.
4) Three Fate Coins will reduce the learning time of a Tool Kit to one week*, or a language down to 30 days* . There is no time requirement if purchased pre-game.
5) Two Fate coins and one week* training  will allow a PC to learn a firearm or armor proficiency. Three fates coins and two weeks* atraining are required for a broad-based melee proficiency.
* = No time requirement if pre-game.

Fate Charms
1) At the start of each session each PC gets one FC (with an additional FC at levels 3, 6, and 9).
2) Each FC can be used once per session, and may not be transferred between PCs or players; unused FC at the end of a session are lost. To use, the player tosses the FC into the Bowl of Holding. More than one FC can be used on a single roll. FC must be committed before the roll is made. Health are the only FC that can be used on another person.
Health: (red) Heal 5 HP or one HP per level, whichever is larger; or three points of bleeding. If used on another person, the healing is based on the recipient's level.
Prowess: (blue) Add +2 to a d20 roll, or Allows a mulligan on a to-hit roll.
Speed: (green) +Gain a free Move.
Peace: (yellow) Remove one Effect*, to include Surprise, or 5 Stress or one Stress per level, whichever is larger, or one level of (non-Primer) exhaustion, or one level of Primer exposure.   * = Will not affect addiction, but neutralizes withdrawal for 24 hours.
Hope: (red/blue) Gain an extra attack; roll damage twice and take the high roll on this attack. Or as either a Health or Prowess charm.
Protection: (blue/yellow) Causes one physical attack, ranged, explosive, or melee, to miss, but it must be used before the GM makes the damage roll. Or used as either a Prowess or Peace charm.
Expertise: (yellow/green) Counts as a max damage critical hit (even on ranged attacks) or perfect saving throw, or may be used as a Speed or Peace charm.
Restoration: (green/blue) Grants a mulligan with an Advantage on any d20, or can be used as a Speed or Prowess charm.

Primer Exposure
Spore fields and certain beasts extrude Primer spores, which are extremely harmful to Humans. Any person not wearing eye and lung protection (most commonly a gas mask) will have to pass a DC 15 Con save each round or acquire a degree of Primer Exposure. For each three levels of PE a person acquires a level of Exhaustion; this Exhaustion will not be removed except through Spitalian treatment.

Rests
The entire group must rest together. Two Short (one hour) and one Long (8 hour) rests may be taken in a 24 hour period.

A PC's Stress Threshold is equal to one of Con or Wisdom (Player must choose at PC creation, and may not change) plus class level.

Other Rules and Rule Modifications